We sincerely welcome you to Uhhyeongung, the Royal Palace Hall.
We introduce traditional wedding reservation and user guides.

Meaning of the Wedding Ceremony

Meaning of the Wedding Ceremony 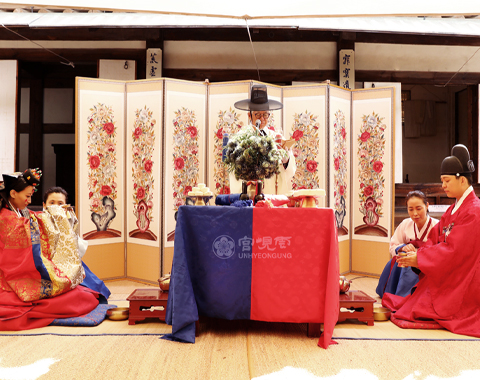 Depending on society's characteristics, there are two types of unification that it values more than the other. In a society where an individual's unification is encouraged, the individual's desire for a marriage takes precedence while at the same time the two individual's will manage a separate branching family line.In this kind of society, marriage is not necessarily important and the ceremony is comparatively simple.


On the other side, in a society where families take more importance, the desires of the two people to be married does not take precedence; rather, it is the will of the families that strongly influences the marriage. After the marriage, the united family will create a different lineage. In this type of society, only through formality and rite can the marriage earn its approval. In particular this was true for the way in which the Sadaebuga managed marriages. They followed the Joseon Dynasty nobility's strict code for ancestors and parents. They believed that two families' union was also of great importance to the ancestors.

Marriage is only one aspect in the Rites of Passage (通過儀禮). Rites of Passage are the processes that mark a human being's beginning his or her lifetime experiencing birth, coming-of-age, death and funeral, and things like wanting the approval of a certain social status and acknowledgement. Couples become adults in marriage and will accompany one another for a lifetime. This is the Sovereignty Ceremony (大禮), which is also called a Rite of Passage.

Marriage can mean, in view of the consultation, a wedding as just a Sovereignty Ceremony, or in light of enlightenment, it begins as both families beginning the discussion of marriage talks and including the related actions such asUihon, Dearye, Hurye.

Uihon is when, before the two families decide on the marriage, a courtesy meeting takes place in preparation for Daerae.

Junghon, as a process of engagement, the man's side sends his thoughts of the woman as his wife to her side. The man sends a Saju letter which contains his date of birth.

The step of choosing the marriage date. The woman's side will choose a date and send the Nahpgi-suh (Marriage Date Confirmation Letter) to the man's side.

Nap-pae(納弊) is when the man's side sends the woman's side wedding gifts. Gifts such as silk and cloth materials will be placed in the wedding gift box before it is sent.

Daerye is also called Chin Young-rae and it is when the Groom goes to the Bride's home for the wedding ceremony.

Hyeonsadangrye is done on the morning of the wedding, where both families visit their Ancestral Shrine Hall to announce the news of the wedding to their ancestors.

After Hyeonsadangrye is completed, the Bride and Groom will greet each of their parents as part of the wedding ceremony.

Jeonanrye is a ceremony where the Groom goes to the house of the Bride and gives a Wild Goose to the officiator of the Bride.

Seocheon Jirye is a ritual where the couple pledges to the gods of heaven and earth that they will live zestfully together.

Seobae Woorye is a ritual where the Bride and Groom make a promise to each other that they will be good spouses.

Hapgeunrye is a ritual where the Bride and Groom will share a glass of liquor as a means of them becoming one by the exchange of the drink.

Hapbangrye is when the Bride and Groom will spend the first night together as husband and wife.

After the main event of the wedding, when Daerye is finished, the Bride will enter her husband's household and begin a ritual process. This ritual is called Hurye.

Woogwi is when the bride goes to live with her husband's family; this can also be called Shin Haeng. The bride will ride on Gama, on the top of which is placed a tiger's pelt.

Hyeonsadangrye is three days following woogwi, when the couple will pay respects at the groom's family shrine.